While there was an overall increase in population during the intercensal period to 2016 this was not universal across all age cohorts with the population of those aged between 20-34 declining by almost 900 people. Given that this group is of working age, it will be critical for Carlow to retain a greater proportion of this age group.

On the other hand there was an increase of almost1,300 people in the 35-64 age cohort. This may indicate that people who had moved away in their 20’s may be returning later in life. It is also notable that Carlow has a higher proportion of younger people than other urban areas such as Kilkenny. In terms of the proportion of people in Carlow who are at work, the settlement of Carlow has a rate of 48% while the County has a rate of 50% (this figure counts all people in the geographic area, not just those of working age/ability). By comparison, the settlement of Kilkenny has a rate of 54%, with Kilkenny County having 53% at work, both in line with the National figure of 53%. As expected for a capital city, Dublin has a slightly higher rate of 56%. Based on both the national figure and those for Kilkenny, Carlow Town would benefit from an improved employment offer.

Greater employment opportunities will also be required if the Town is to retain more of its young people.

Of those who are at work, 47% work in the categories of commerce & trade (24%) and professional services (23%) in 2016. This represents a decrease of 3% in those working in commerce and trade since 2011, while professional services have remained largely unchanged. The manufacturing industries category also employs a significant proportion of the working population in 2016 at 11%. This is also down slightly from 12% from the 2011 census. 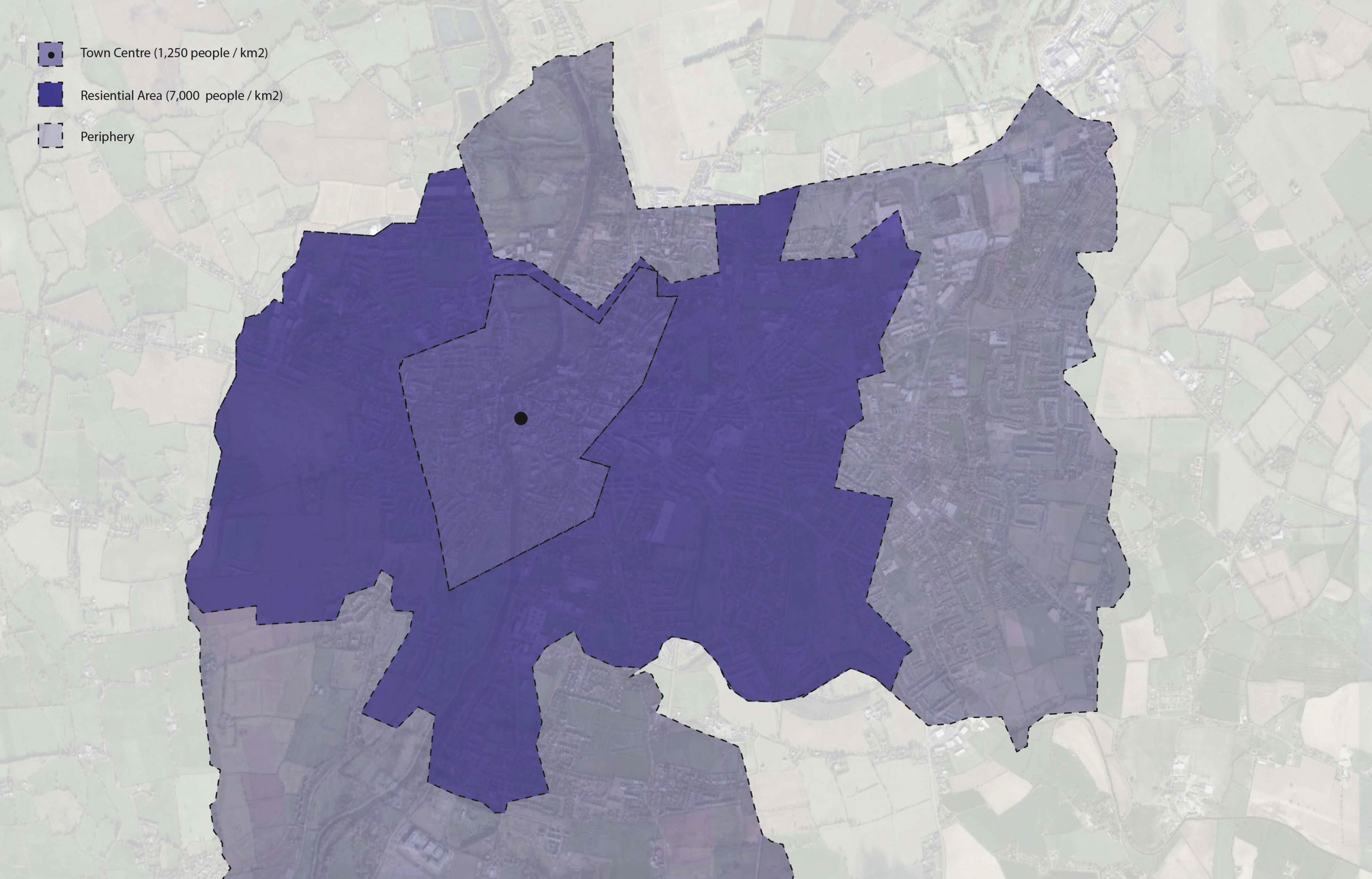 While an analysis of recent growth patterns, in combination with the RSES projections, provide a sound basis for understanding population growth, other external factors will also impact the level of future growth. Such factors include the delivery of initiatives in relation to employment and quality of life. One of the key issues affecting population growth in Carlow is the Town’s capacity to retain its younger population. An expanded third level offer combined with improved career prospects within the Town will help Carlow to compete with other locations. The comparatively low cost of housing should also act as an attractor in this regard.

Should the recommendations of this Strategy be fully implemented, it is anticipated that the resultant improvements in the local economy and quality of life will support increased population growth, and retention in the 20-34 age cohort, above those experienced previously or projected by the RSES.

In addition, there are agglomeration benefits for Carlow Town should it grow as a settlement. In this regard larger settlements will often have a competitive advantage in attracting knowledge intensive businesses due to the availability of qualified workforce, knowledge sharing opportunities and closeness of supply chain which in turn enables them to attract private investment. A larger population, in itself, also creates demands for education, health services, transport and other general community infrastructure as well as local amenities. The availability and quality of these assets also affect the location decisions of businesses, particularly in the service industry.

This increase between 2011 and 2016 is distributed as follows:

An examination of neighbouring Kilkenny, shows that there are major differences between the two settlements in terms of population distribution. The population of Carlow is relatively younger than Kilkenny, with a higher proportion of children (14 and under) and young professionals (20-24). The high proportion of young persons in Carlow may be attributable to the presence of two third-level educational institutions (Institute of Technology Carlow, Carlow College) or lower housing prices, both sale prices or rental prices, making the area more affordable for students, young professionals and young families. 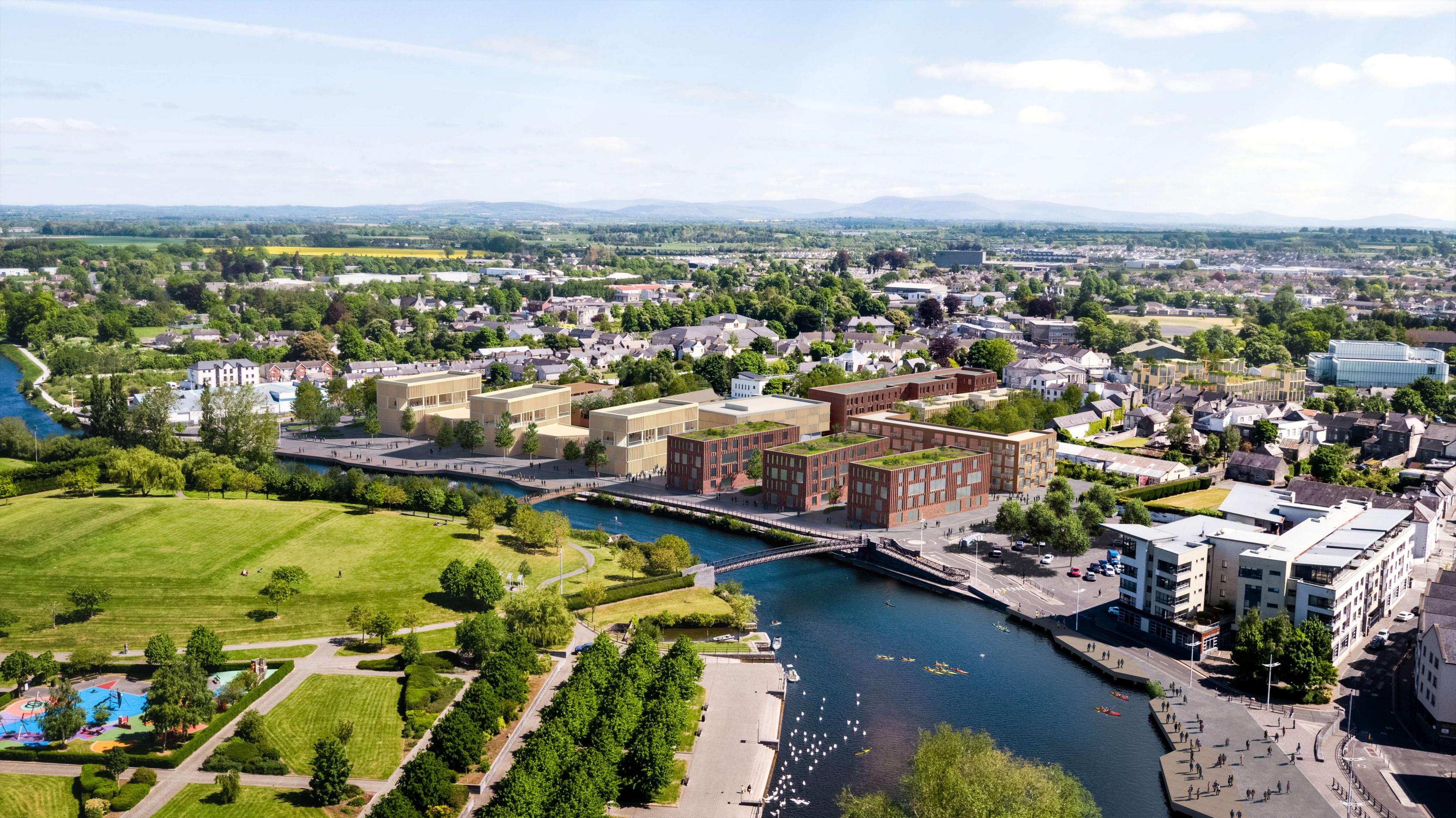 According to the 2016 Census, 50.4% of the population aged 15 and over had a low level of education, upper secondary or below. This is relatively high compared to other settlements such as Kilkenny, 46.3% or Dublin, 43.8% and is above the State average, 48.6%.

The proportion of university graduates, bachelor, postgraduate, doctorate, at 25.1% was also low compared to other settlements such as Kilkenny with 32.1% and Dublin with 40.3%. It is however, notable higher than the State average of 19.8%.

The proportion of the population in Carlow with an intermediate level of education, technical/advanced/ higher certificate, at 24.5% is greater than in other settlements such as Kilkenny with 21.6% and Dublin with 15.8%. It is also higher than the State figure of 21%.

Carlow Institute is located in the Town and is a specialist college in South Leinster, and the largest provider in the region. With over thirty years’ experience, Carlow Institute supports people to develop their talents, with many progressing to Further or Higher Education. The two major third level providers in Carlow are Carlow College and the Institute of Technology, Carlow. Carlow College offers a range of undergraduate, postgraduate and evening courses, focused on arts, humanities, and social, political and community studies. The Institute of Technology accommodates a faculty of engineering, a faculty of science, and a faculty of business and humanities with science, technology, engineering and maths courses making up 75% of the prospectus. Given the existing educational profile identified above, enhancement of tertiary education sector in the Town must be actively supported.

The level of education in an area is a determinant factor for some business when assessing new locations for their operations. Whilst some business activities will require access to a manual workforce, and therefore have a preference for areas with high proportion of the population with technical qualifications, knowledge based industries require access to a highly educated workforce. In the case of Carlow, the relatively lower level of educational qualification achieved by the population, both in the settlement and the County, may affect the attractiveness of the area for such businesses.

The short term solution to this issue is to focus on industries that match the current skill set of the population. However, in order to grow Carlow’s employment base and build in resilience to external shocks there must be a drive to upskill. Given the changing economy and technological disruption and advancement, upskilling is necessary for a number of reasons, as discussed further below.

The proposal for a technological university for the South- East would involve the amalgamation of Waterford IT and IT Carlow to create a multi-campus facility. The development of the programme would see Carlow IT become a campus of TUSE, with other campuses located in Waterford, Wexford, and Kilkenny.

The RSES recognises the need for a Technological University in the South-East, stating that:

“The lack of a competitive and internationally recognised university in the South-East puts that SPA at a disadvantage and hinders the potential for new business formation. Therefore, the project of the Technological University of the South-East (TUSE) is critical to the future economic performance of the South East SPA within the Southern Region”.

The process for designation as a Technological University consists of four stages and requires the merger of two or more institutes of technology. Given the rigour of the application requirements, it is perhaps unsurprising that the process has suffered some setbacks and will require a delicate programme of engagement and negotiation. However, the benefits of the creation of TUSE are likely to be substantial to Carlow and a key driver of regional development.

It is envisaged that the creation of TUSE will have the following benefits to IT Carlow:

Taken together, the above benefits are likely to result in an increase in student numbers, as the profile of the institution increases and its range of courses expands. It will also offer the opportunity to service the ever evolving needs of the working market for convenient lifelong learning opportunities that can be developed with industry to meet their needs.

The vision is one of interconnected campuses where high quality education can be delivered regardless of geographic location. 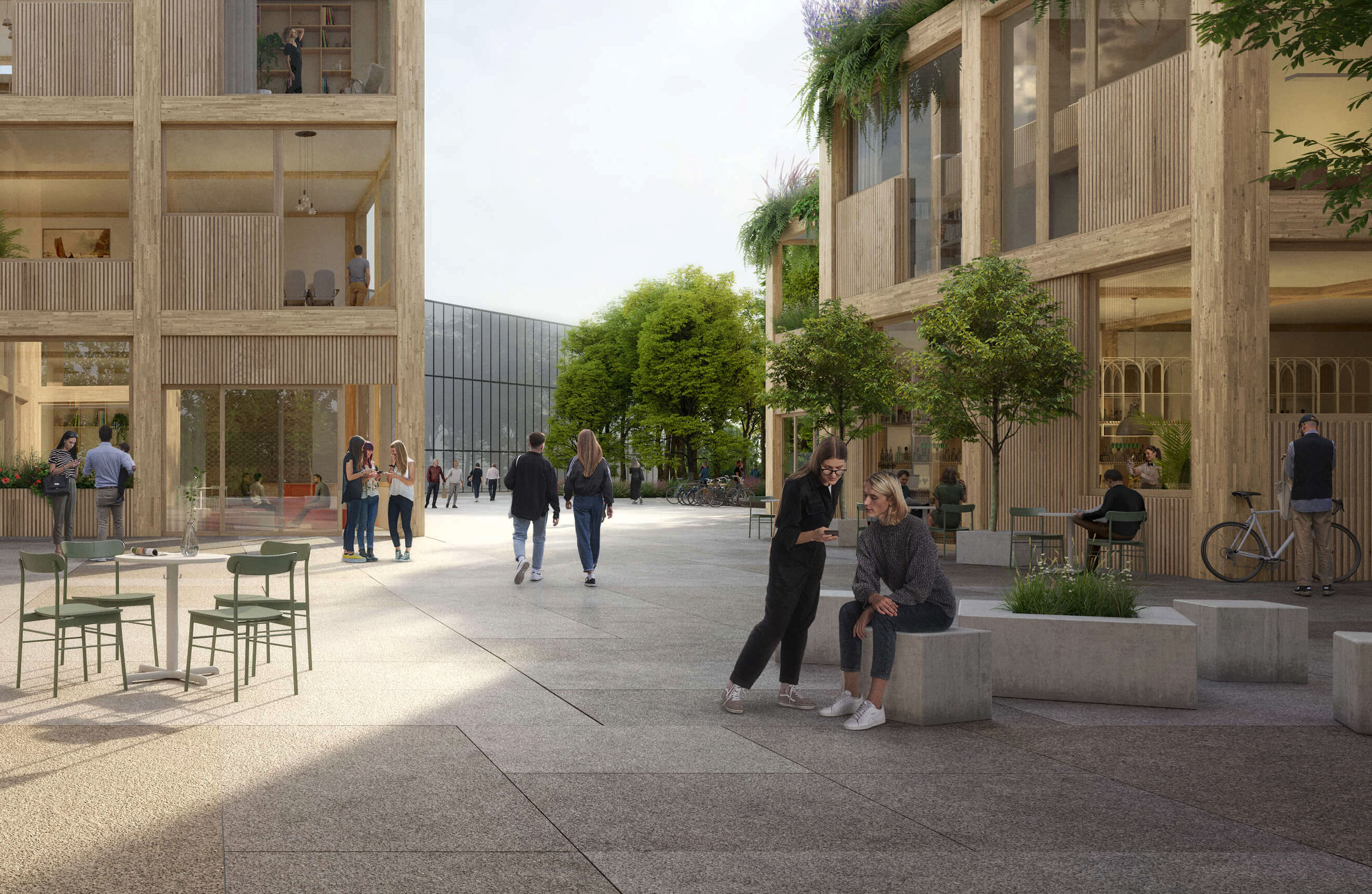 The Report further highlights the pivotal role that TU’s can play in regional development, enabling deep collaboration between employers and the tertiary education sector, with a particular focus on innovation, technology and SMEs. It also acknowledges that the form that TUs take will be shaped by the unique character, environment and skills requirement of the region, with the TU serving as an anchor institution in its development and advancement.

The Government views TU’s as having a vital role to play in delivering Project Ireland 2040 as key regional drivers of change and growth. Budget 2020 set aside €90 million over a three year period for this purpose.

The construction and manufacturing industries in Carlow Town employs approximately 1,400 people out of the working population of the Town. As identified in the table below, many of the key employers in the Town are in these sectors.

Given its existing base, Carlow Town is well positioned to diversify its offer in the area and attract an increasing number of businesses operating in the expanding field of building innovation. There is also growing demand in the area of construction material development and manufacture, particularly in the context of sustainable development and nearly zero energy buildings.

Carlow Town already posses a range of assets that support further expansion in the area of building innovative such as:

Working with these assets and supporting and facilitating the creation of synergies between the third level institutes and the existing manufacturing related companies, Carlow Town can develop niche technologies and create a centre of excellence in the field of emerging construction technologies. This, in combination with investment in the development of high value manufacturing, such as home technology solutions, presents Carlow Town with the opportunity to be at the forefront of the building innovation sector.

In recent years vacancy levels and the number of underutilised/vacant sites within Carlow Town have increased. These include the terrace of currently vacant houses on Barrack Street, the former Bank of Ireland site close to the Civic buildings on the Athy Road and the adjacent lands along the Barrow Track, the former cash & carry site on Kennedy Street, the cultural quarter around Carlow College, the Pembroke area, as well as the core Town Centre blocks.

While this increase has negatively impacted the Town in terms of vitality and vibrancy, permeability and the lack of a sense of a core, it also presents opportunities. Many of the existing underutilised/vacant sites are strategically located within the Town Centre, with their development providing the opportunity to not only deliver new uses, such as employment, community, and innovative forms of residential, but to enhance permeability within the Town, link uses and space and create a definable Town Core.

There are also a number of opportunity sites outside of the Town Centre including the former Braun electric site on the N80. These sites have the scale and potential to facilitate significant employment generators for the South- East Region.

Approaches to reducing vacancy levels, dereliction and underutilisation include the identification of suitable empty or unused space above existing ground level shops in the Town Centre and their conversion into residential accommodation. Opportunities may be created for a mix of social housing, rental tenancy or private ownership that will serve to increase the vibrancy of the Town Centre. This overall approach can add to the drive towards providing increased levels of housing within the Town Centre in accordance with national policy objectives.

Vacant and underutilised buildings can be brought forward for alternative uses such as business start-ups, temporary workspaces or pop-up shops that will draw people back to the Town Centre in the short-term, while future development proposals for these buildings can then be explored and formulated in the medium to longer terms.

Publicly accessible and up-to-date information regarding available funding and grants through Government and local initiatives/incentives for the refurbishment of buildings should be promoted and made available to property owners.

A set of Outcomes have been derived and formulated in relation to the Economic and Investment Core Theme. An associated Action accompanies each that provides a clear direction for the delivery of the Outcome.