The Pembroke area is located immediately south west of the Town Core and is a substantial area of underutilised and/or vacant land with pockets of residential on the edge of the River Barrow. The vision for this area as an Intervention is to reimagine it as a new and vibrant residential quarter that benefits from its position on the banks of the River Barrow, new public spaces and enhanced connections with the Town Centre. This Intervention is central to realising one of the key aims of this Strategy, the promotion and delivery of Town Centre living.

Under the Intervention the area will be transformed to facilitate a range of residential types and densities, attractive to both residents and visitors due to a new public riverfront park, enhancements to the public realm, public riverfront connections and improved connectivity through the provision of two new bridges across the River Burrin. These bridges will provide direct access for both vehicles and pedestrians to Carlow Castle, which is also subject of an Intervention, with the pedestrian bridge continuing the pedestrian link along the River Barrow which can be expanded in the future as part of the Barrow Track. 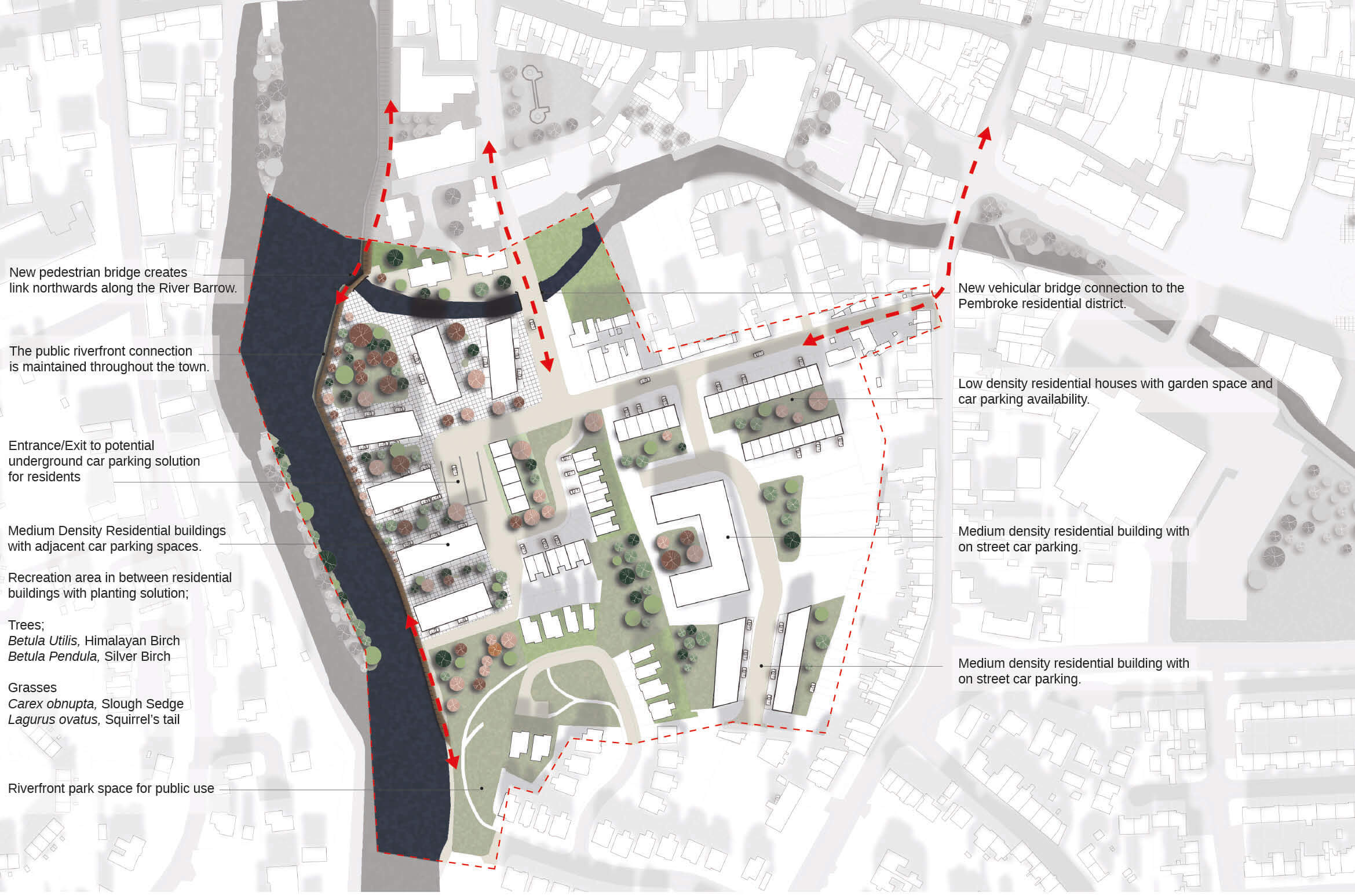 “Cities have the capability of providing something for everybody, only because, and only when, they are created by everybody” - Jane Jacobs

A new residential district in the Town Centre that integrates with the existing urban fabric, improves the built environment and enhances access to amenities will be a transformational project in terms of achieving a core aim of this Strategy, delivering Town Centre living. The project will not only regenerate a substantial area of largely underutilised land but it will put people back in the Town Centre, help stabilise and grow the local economy and will breathe new life into the existing community. The reuse of these lands will also unlock the River Barrow as an amenity asset for both residents of and visitors to the area, including Carlow Castle to the north.

Living in the Town Centre was once a common feature of Irish Towns with people living close to where they worked, where children went to school and where they socialised. Walking and cycling were the main forms of transport with limited need to travel by car on a daily basis, while the critical mass of the resident population keep local retailers and services providers viable. However, as the population grew and housing demand increased, the development of new housing focused on suburban locations where land was readily available, easily accessible and restrictions to development were limited. The loss of Town Centre living had a severe negative impact on the vitality and viability of many Irish Towns resulting in business closures, vacancy, dereliction and streets dominated by cars.

As we become more climate aware, environmentally conscious and move towards a more sustainable way of living there is a renewed focus on Town Centre living. Urban residential schemes typically rely less on cars as the primary mode of transport due to their location relative to employment areas, services and amenities. In a postCovid 19 world, Town Centre living enables people to continue to live their lives, meeting their daily needs, while adhering to the advice to ‘stay local’. Along with the other Interventions outlined in this Strategy, the delivery of the Pembroke District Intervention will support the overall strategy of regeneration in Carlow Town and promote healthy, innovative, culturally rich and socially connected community activity. 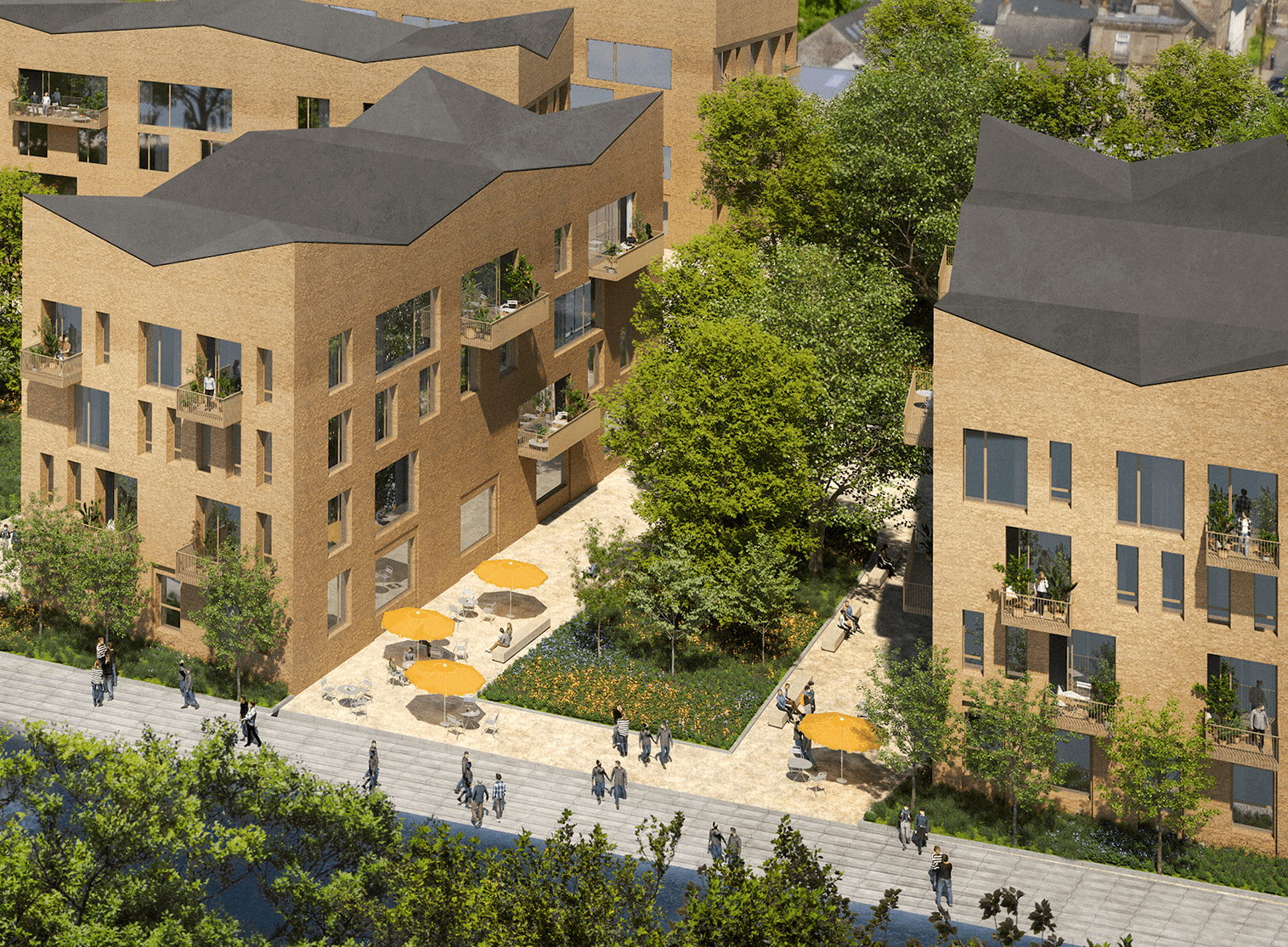 Residential Use at Pembroke District The delivery of the overall scheme of projects presented as part of this Intervention will require a collaborative approach by both public and private parties. While this Intervention provides an indication of how this strategic Town Centre sites could be developed to deliver a new urban quarter rich with amenity spaces, the delivery of a residential scheme in this area is open to interpretation as detailed design progresses through consultation and partnership with the Local Authority.

While the main outcome of the delivery of this Intervention will be the creation of a new residential district in the Town Centre, the final layout and detailed design of this will be subject to consultation with the Local Authority and therefore, an exemplar for comparable costs on the residential element is not viable.

A key feature of this Intervention to be delivered, notwithstanding the finalised design of the overall residential element, is the new pedestrian bridge. This bridge will provide a direct pedestrian link north toward the Castle and Town Centre as well as maintain a public River front path along the Barrow.

To provide a benchmark for the capital costs for such a bridge the ‘Living Bridge’ within the University of Limerick campus was reviewed as an exemplar. While the receiving physical environment and detailed design are unique to that project, it is similar in terms of the range of works. In addition, the ‘Living Bridge’ brings an additional element than just functionality, taking its design from the organic form of the River, it can accommodate a range of social, cultural and educational activities. This is a concept which should be considered in the design of the Pembroke pedestrian bridge given its riverside location, its integration in the wider Barrow track and its proximity to Carlow Castle. Completed in 2007, the ‘Living Bridge’ has a 350m span across the River Shannon, making it the longest pedestrian bridge in Ireland, and cost €12 million. It was financed through a public-private partnership. 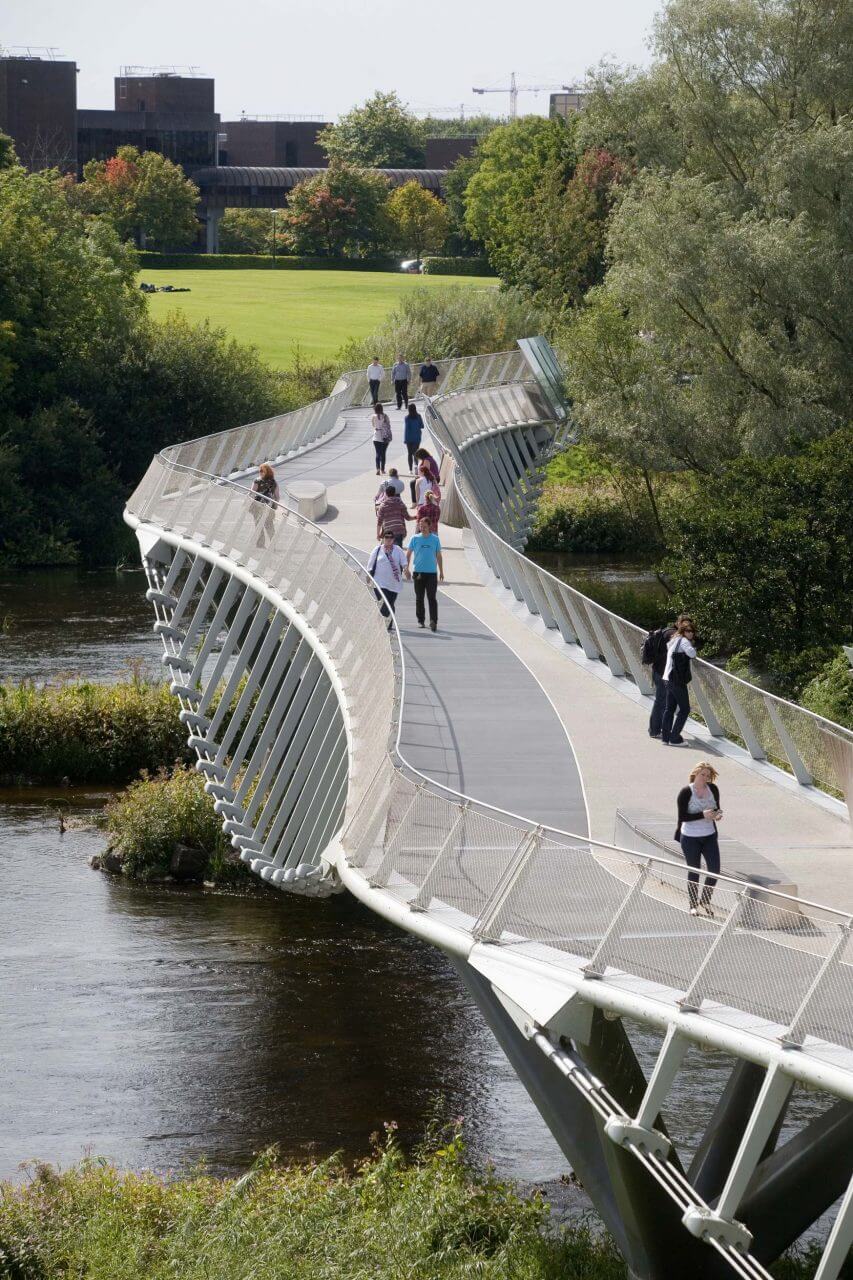