The purpose of this Intervention is to improve Town Centre linkages and increase pedestrian mobility from Potato Market through to Barrack Street with wider connectivity to Carlow College and the Railway Station. Better management of cars and pedestrians will serve to improve the overall quality of the space and serve to reinstate the area as the ‘Heart of the Town’.

Connections between Potato Market and Barrack Street are improved which provides additional routes around the Town Centre and improves overall circulation leading to a better experience of the area. The integration of link streets such as Tullow Street, Dublin Street and Shamrock Square are important facets of this intervention and they serve to enhance the vibrancy and viability of this space.

The intervention at Carlow College will provide additional connectivity from the Town Centre to the college campus itself as well as to the Railway Station. Permeability through Carlow College as a public space is a key component of this Strategy and is promoted through the design features of this intervention. 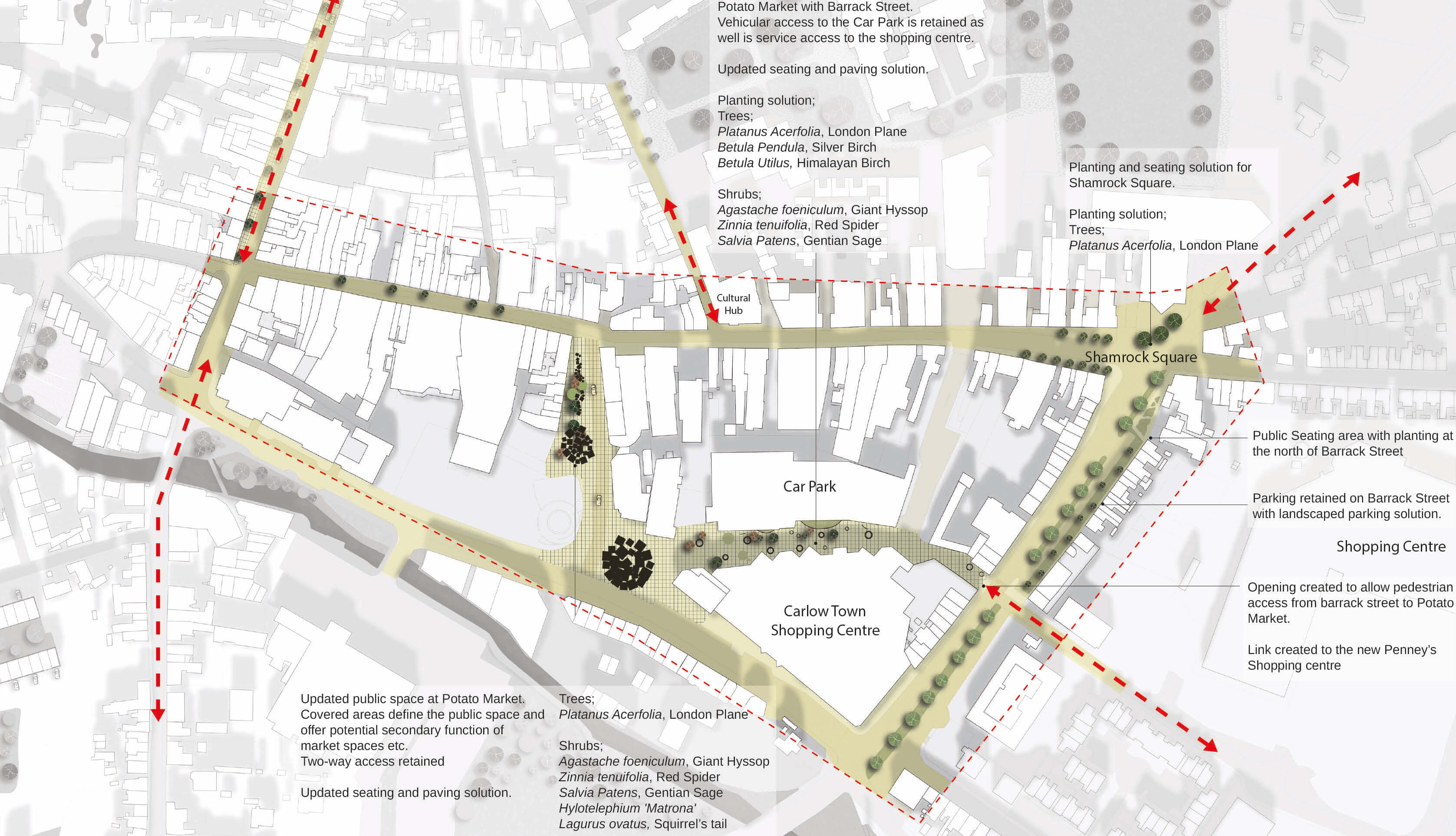 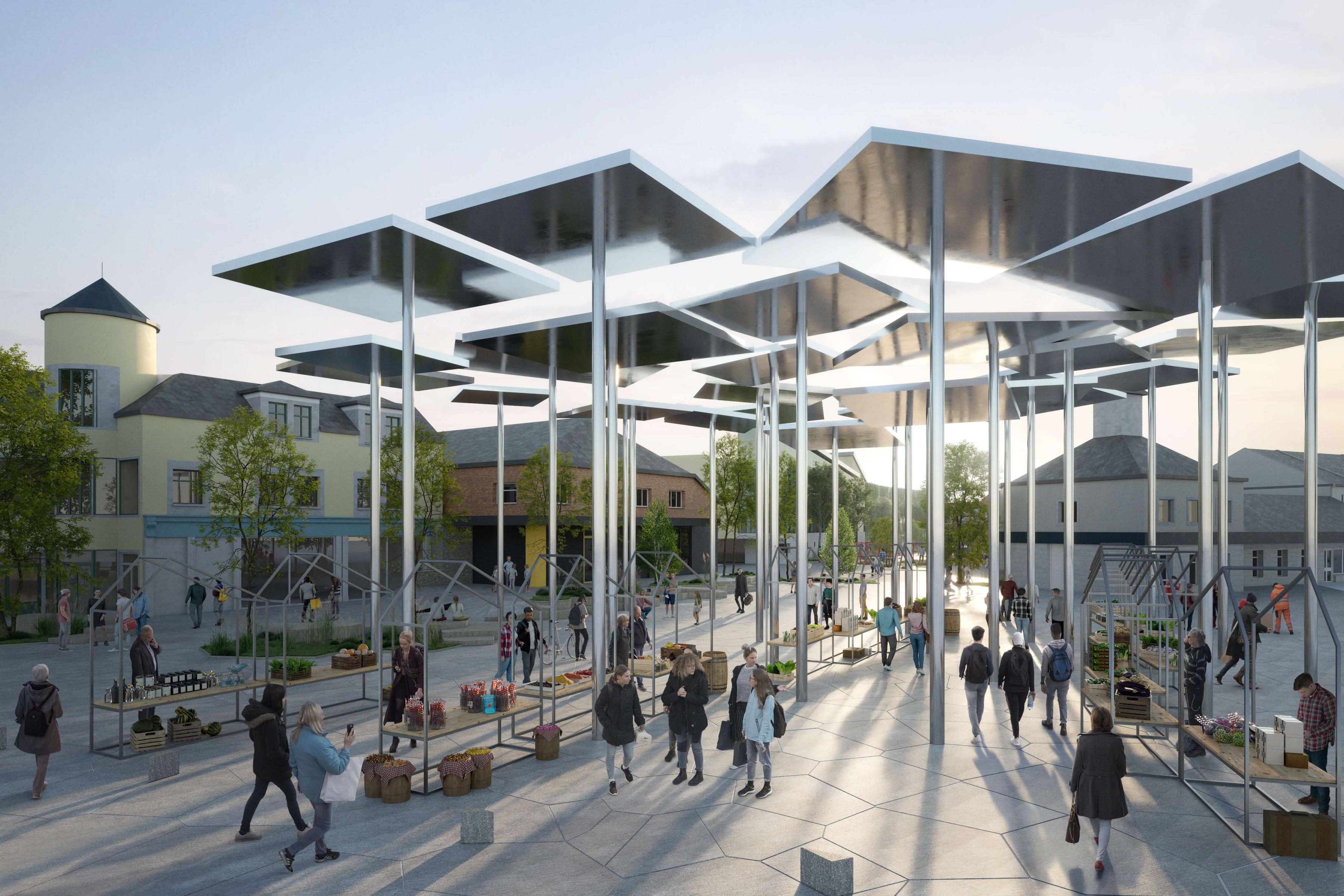 ”You can’t rely on bringing people downtown, you have to put them there”  - Jane Jacobs

Increasingly, through the 20th Century in particular, Town Centres have become places dominated by the private car, however, in this time of a renewed focus on infill and brownfield development across Ireland, how we treat our streets and create public spaces will not only be an enabler for planning policy but brings immediate benefits to a location. With a ‘people first’ approach to urban design and planning, the public domain will be given back to the people visiting and residing in the Town while still ensuring high levels of accessibility.

Renewing and improving streets and urban spaces is a constant feature of urban development and it is essential that each time changes happen that they bring benefits that realise a more accessible and pedestrian friendly environment. This Intervention will reallocate space back into the public domain, actively manage the street environment and reallocate road space to deliver a safer environment for walkers and cyclists. These measures in combination will create an attractive core Town Centre area and make the area identifiable as such.

The Potato Market is the centrepiece of an overall strategy of regeneration in Carlow Town and promotes healthy, innovative, culturally rich and socially connected community activity. A reimagined and redesigned Potato Market will be a ‘game changer’ for Carlow Town, a catalyst for wider urban regeneration and prosperity. This transformational project will refocus and overhaul this crucial urban location within the Town Core, breathing new life into the space and surrounding businesses. The change will be measurable in terms of both its visual appearance and uplift to the main business area. Made possible by the crucial decision to relocate the existing road and reduce its dominance, the redesign of Potato Market utilises one of the most plentiful features of any town, which is its streets.

All streets differ in their character and the proposals along Barack Street and around Shamrock Square recognise the function of these routes and are designed to make the area more user-friendly to pedestrians and cyclists, with design changes to encourage people of all ages and abilities to walk or cycle for leisure, travel or exercise.

The Proposal seeks to achieve a balance in this area of transition to the Town Centre, which will support the vitality of the retail/commercial business while bringing the visual uplift that will unify with the Barrack Street Link to Potato Market and Tullow Street in particular. Linking into the other interventions proposed, these changes will have the cumulative benefit of creating routes around the Town Centre which can be used for physical activity and add to the overall attractiveness of the Town as a place to live.

To create a successful place it has to be truly accessible to all and link key areas or districts. A link from Barrack Street to Potato Market has been envisaged for some time, connecting the old and the new, this direct route between local destinations and services will deliver a safer environment for walkers and cyclists while facilitating the needs of the Town Centre’s commercial activities. One of the key aims of this proposal is to promote ‘retail prosperity’ at a time when the sector faces challenges. However, this proposal encourages consolidation and linking the modern shopping centre to the east with the retail core which will leverage competitive advantages for the Town. While the physical link in itself is crucial, the quality of place that is envisaged will also attract not only those wishing to use it for its transient benefits but also people who want to dwell and interact. As with all proposals as part of this Town Centre project it has not been conceived in isolation and is an integral part of a wider connectivity and activity objectives.

In this time of crisis as the Country and the World battle COVID-19, these proposals bring urban improvements which will transform the Town Centre and facilitate physical distancing where required and not necessarily social distancing. The design solutions put forward are the product of a place based approach to the future development of the Town which seeks to realise a vision in collaboration with the local community. Great thought has been put into the detail of this Intervention with the use of high quality materials, innovations in rainwater harvesting, the use of solar energy, the promotion of a ‘dark sky’ approach to lighting and the greening of certain areas particularly noteworthy. Integrating these elements not only aligns with best practice but in the unified fashion proposed, will bring economic and social benefits that make Carlow Town a place known for its people having a high level of health and wellbeing. 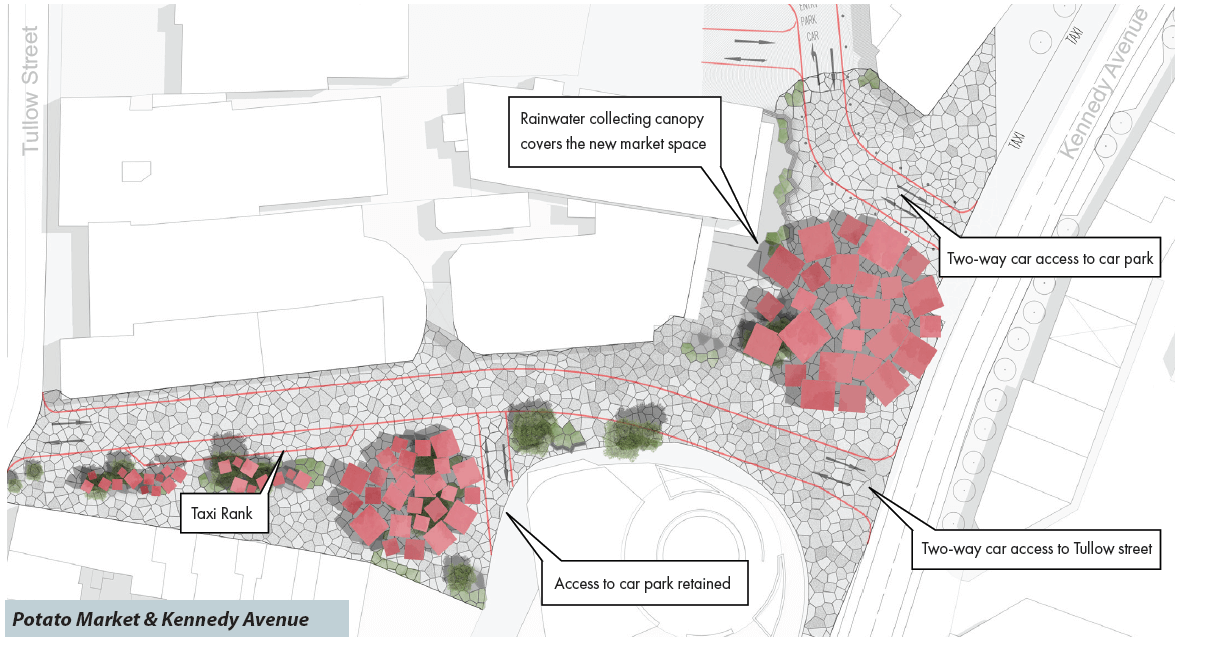 The various projects outlined as part of this intervention will act as the catalyst for change in Carlow Town. The reimagining of the Town Centre in Carlow will help bring a sense of identity to residents and visitors while also improving overall visitor and shopping experience.

Through continued and active engagement with stakeholders in the Town it is known that the approximate weekly footfall at Fairgreen Shopping Centre is 100,000 with the corresponding figure for the Town Core being 10,000. The bringing together of these two pillars of the Town Centre area will help consolidate the retail offer and build resilience for the retail sector going forward. As we move into a more ‘experiential’ environment for retail the links between the old and the new have never been as important. The linking of these areas has been in the pipeline for a long number of years with the time to implement being now. Taken in conjunction with the Rebuilding Ireland secured funding of c.€1.2 million for the refurbishment of the Barrack Street properties, this proposal will ensure the most efficient use of public funds from different sources which together will achieve a greater return on investment. Potato Market & Barrack Street Link Potato Market & Barrack Street Link Shamrock Square Junction

The Potato Market as the centrepiece of an overall strategy of regeneration in Carlow Town will be defined and identifiable from its landmark canopy. As the key defining feature of this new sizeable Public Plaza, a costing exemplar for a canopy structure has been identified in order to provide an indicative cost.

Canopy structures are relatively underutilised in Ireland which considering the climate is somewhat surprising. Finding reference examples can thus be difficult, however, a direct comparable to the style and type of canopies proposed in Potato Market exists in Waterford. While the proposals are bespoke structures there are great similarities with the metal and mirrored glass canopy designed and built to cover the Apple Market area in Waterford City. The structure, which is situated between Waterford’s Viking and Norman Walls, covers an area of 1,400sq.m. and consists of a triangular steel and glazed canopy held up by nine steel columns. While this structure is specific in design and scale to its setting, and included specially developed reflective material, it is a good price exemplar of a similar type of project and cost c. €1.2 million.

The Barrack Street pedestrian link is a fundamental part of the Town Centre Intervention and represents a true collaboration between the Local Authority, the private sector and state agencies. In particular, the Rebuilding Ireland funding of c.€1.2 million for the refurbishment of the derelict properties along Barrack Street is important along with Musgraves who own land along the route and are supporting this Intervention. This cross sectorial level of support and investment is crucial to successful regeneration and all parties realise the cumulative benefit to the Town.

The adjoining Fairgreen Shopping Centre has also committed to a Phase 3 development of their modern shopping facility, which received planning permission in 2020. When implemented along with the Barrack Street pedestrian link, these developments will merge the 100,000 per week footfall of Fairgreen and the 10,000 per week footfall of the Town Core to create an overall investment package that will drive regeneration.

In 1962 Copenhagen City Council decided to establish a car free pedestrian zone along Strøget (located in the centre of Copenhagen), to counter the influx of motorised vehicles along the streets of Copenhagen. Initially, Strøget was trial tested as a pedestrian zone over a two year period and in February 1964 the tested zone was made permanent. Strøget was the first pedestrian street in the world and has since become Copenhagen’s largest shopping area and stretches 1.1 kilometres long. Up until 1962, all the streets were filled by cars and all the squares were used as car parks. The pedestrian street starts at the Town Hall Square and ends at Kongens Nytorv – or visa versa. The Strøget area encompasses a number of side streets and many historic squares. The 1.1 km stretch covers the streets Frederiksberggade, Nygade, Vimmelskaftet, and Ostergade. Strøget is home to a large variety of shops catering to every budget and includes flagship stores of international brands.

Key Features of the Area

Strøget is famous for its variety of shops, restaurants, cafes, theatres, museums and eateries. Strøget is also popular amongst street performers due to the number of pedestrians passing through. The auto – free zone has become a haven for tourists from all over the world. Visitors are attracted the noiseless environment, the fresh air, the location, the atmosphere, the vibrancy and vitality, interaction amongst people, and the creation of a safe and secure zone. This active adjacent commercial business along Strøget is helped by the footfall of the pedestrian space.

Jan Gehl played a significant role in the design of Strøget Street and was an early advocate of traffic calming, and designs to accommodate bicycles, and particularly pedestrian – only streets. Gehl noticed that people enjoy observing other people. A key notable feature of Strøget Street is the number of benches along the street facing the street.

The Stork fountain is located at the intersection of Strøget, on Amagertirv Square, which is a welcome sight amongst the many restaurants and cafes and pedestrians and cyclists will pass it along the Strøget. This fountain creates a relaxing ambiance amongst what otherwise is an extremely crowded street in Copenhagen, the fountain anchors the space.

Copenhagen city centre has some 7,000 residents. The pedestrianisation of Strøget has allowed for the integration of living areas and city life. Most residents occupy space above ground floor use which is something that is not apparent in Carlow Town centre with the vast amount abandonment of buildings.

It is obvious auto – free zones increase pedestrian activity, the atmosphere in a town or city and the general interaction amongst people. In Potato Market the proposal completely removes the dominance of the car and while it is still accommodated its location been marginalised and a public plaza created for pedestrians to use and retail to prosper from. 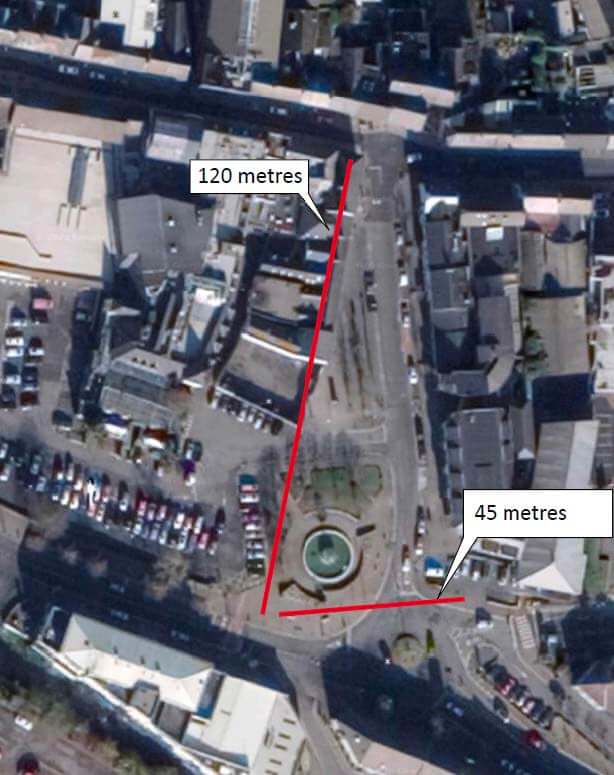 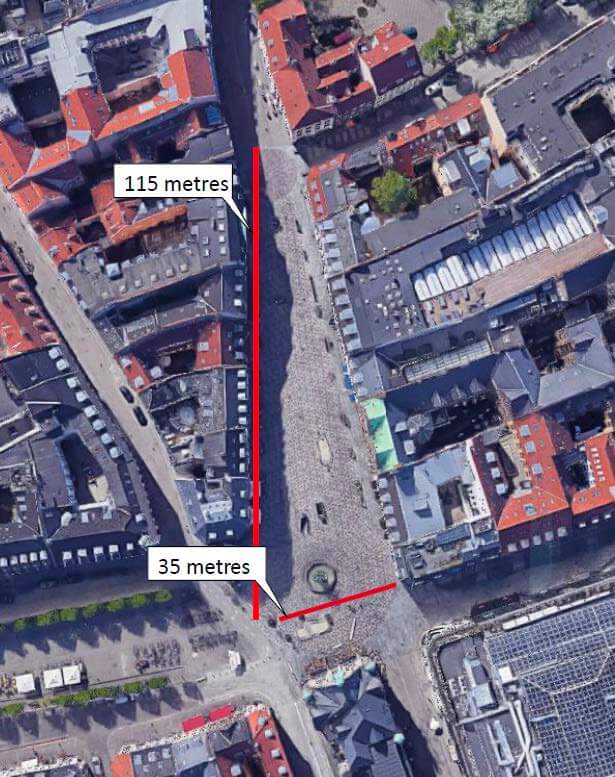 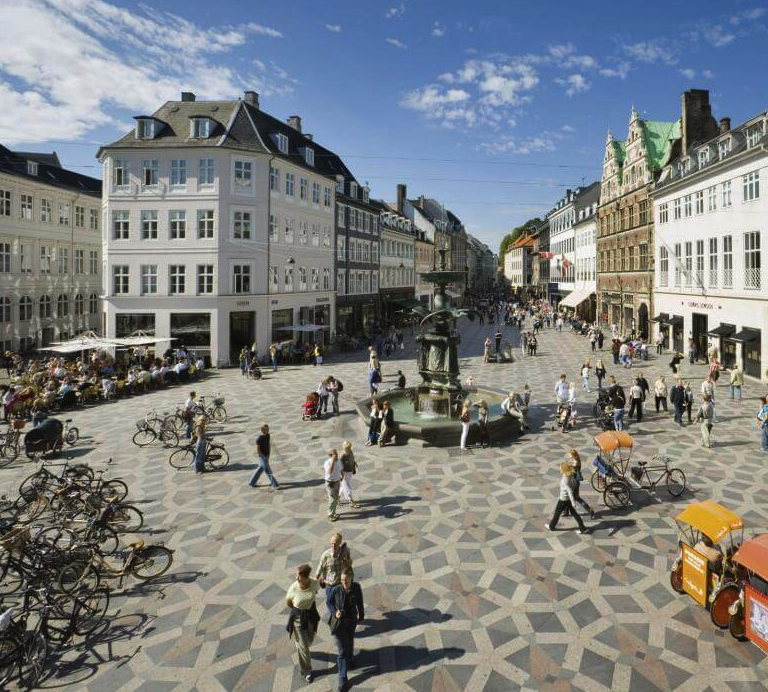 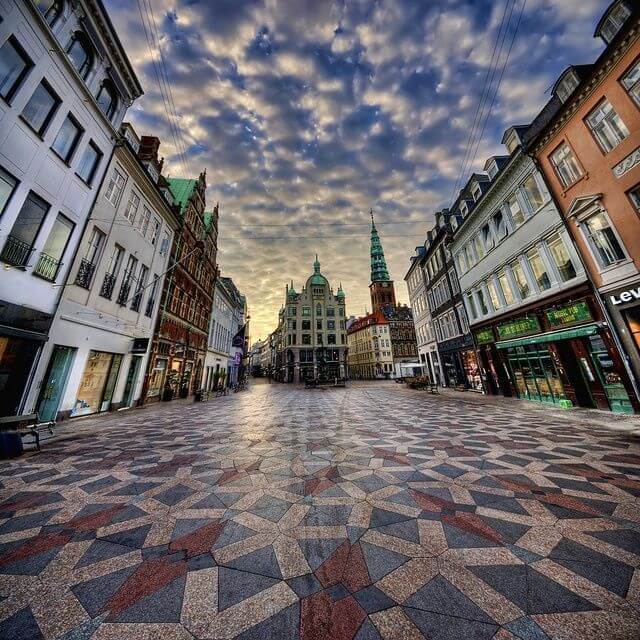