The Burrin River runs south east to north west through Carlow Town, providing a ‘blue’ connection parallel to the Town Centre that offers an alternative route within the Town. The vision for this Intervention is to create a continuous link that faciliates an ecological corridor through the Town, exposes the potential benefits that the River presents as an amenity corridor, as well as acting to connect and integrate existing green spaces, Intervention Areas and Carlow Castle into the wider urban fabric of the Town.

Key to the success of this link will be cross-connections to the Town Centre and existing amenity areas, such as Hanover Park and Carlow Castle, and its incorporation as part of the future delivery of development sites along the banks of the River, e.g. the former Cash and Carry site and the underutilised lands adjacent to Carlow Castle fronting the River Barrow.

The Intervention extends beyond the banks of the Burrin River seeking to deliver an animated and usable blue connection that runs to the River Barrow and incorporates pedestrian links along the riverfront and a new connection with the historic Carlow Castle. 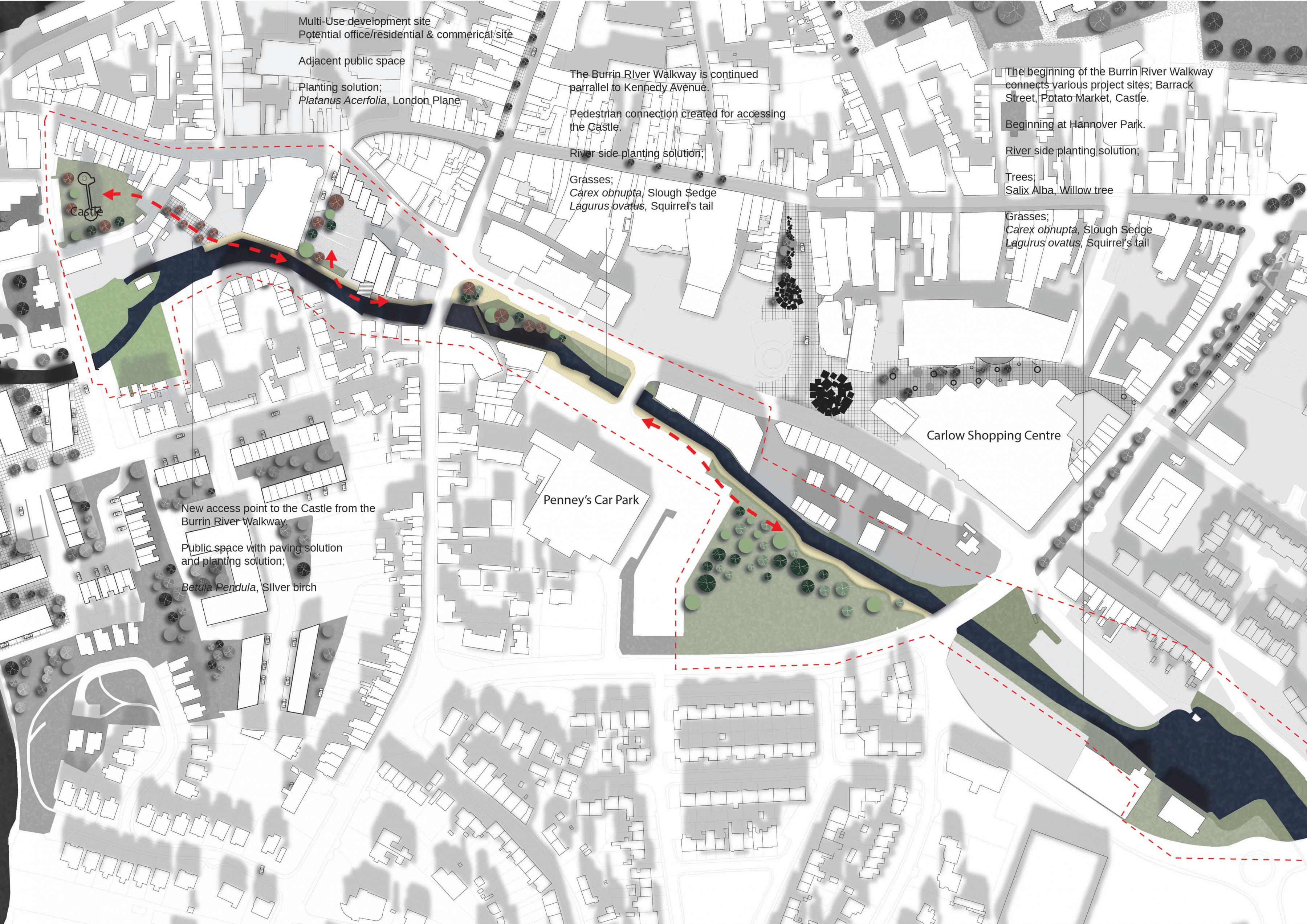 It is an aim of this Intervention to prioritise the exposure of the key heritage and natural assets of the Town Centre. By improving the exposure and interpretation of Carlow’s cultural heritage it is sought to enhance the setting and context of Carlow Castle and help reconnect its history back into the Town Centre. Linking the Town’s built environment with local history and interpreting its social heritage can further deepen Carlow’s the sense of place. The cultural heritage embodied in the Town is a significant resource that includes the natural heritage amenities of the River Barrow and River Burrin, which together will act as a major attractor and significant tourist asset for the Town Centre.

There is a unique opportunity in this Intervention to provide a riverside walkway along the River Burrin which runs from the River Barrow, Carlow Castle right through the Town to the south-east. There is limited formal access or pathway along the River Burren within the Town Centre boundary and this Intervention supports opening up the river as a pedestrian route through the Town that would not only connect into the existing and enhanced pedestrian network but would provide a new and direct link from the east of the Town at Carlow Castle and the River Barrow to the west at Carlow Shopping Centre and linking through to the existing amenity walkway to the south-east. It also presents an opportunity to provide another amenity corridor for pedestrians and an ecological corridor which will enhance the quality of life in the Town, making it more liveable and visually attractive.

Opportunities for greater connectivity are presented in a multitude of ways within this Intervention, with proposals for a Water Activity Centre on the River Barrow to the north, the Pembroke District intervention to the south and the Town Centre proposals to the immediate east of the area. Carlow Castle will be showcased as a principal identifying characteristic of the public realm and a key link between the different areas within the Town.

There is an additional opportunity on the former Cash & Carry site, which is under public ownership. It is envisaged that this site can support a mixed-use development with the potential for office, other commercial and residential uses while incorporating the River Burrin walkway as an integral element. Furthermore, the upgrading and enhancement of the River Barrow edge for a potential Water Activity Centre will offer a unique attraction for tourists as well as a state-of-the-art facility for locals to enjoy. These features will support Carlow’s regeneration in becoming an inclusive and vibrant Town Centre. 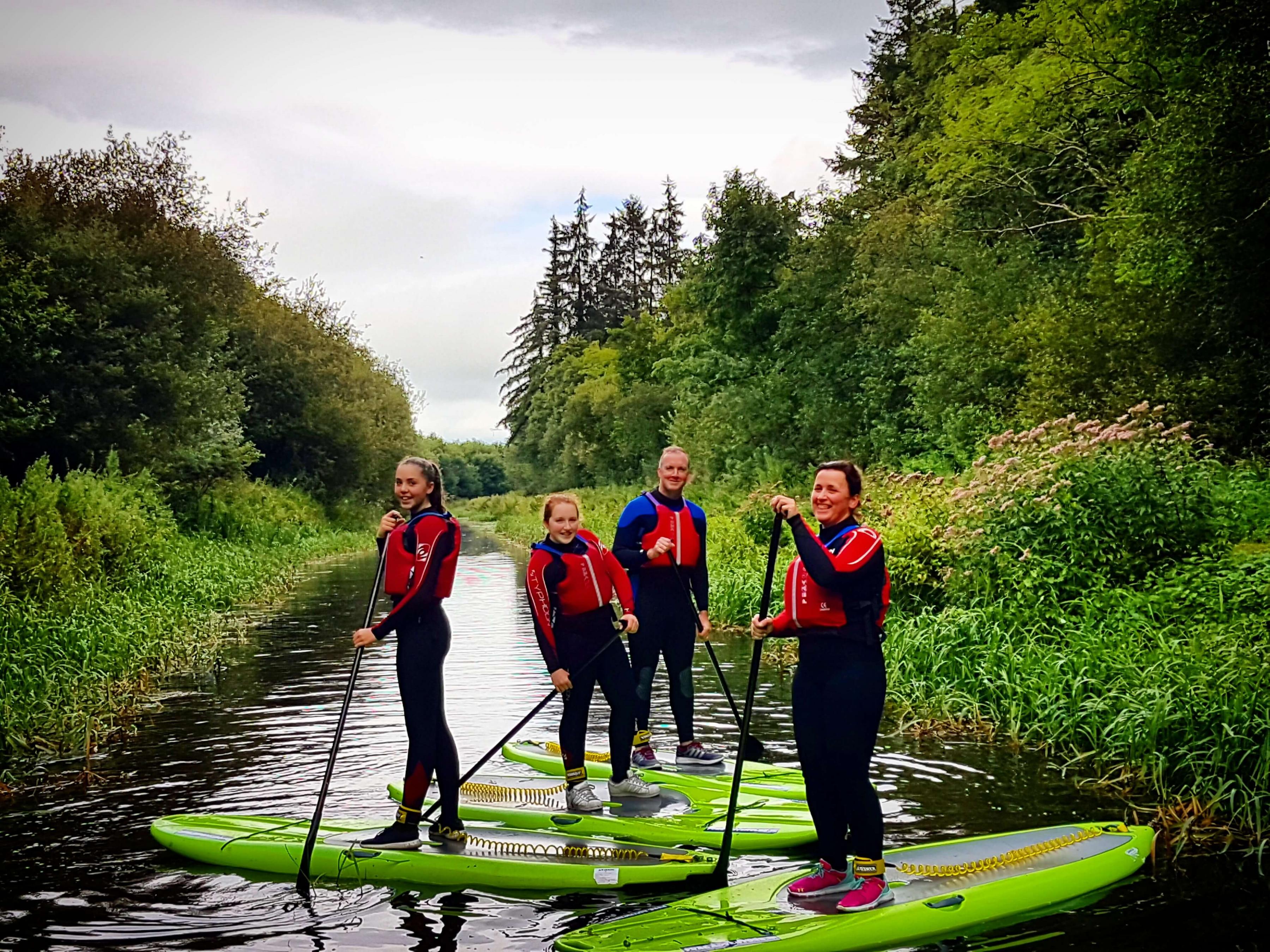 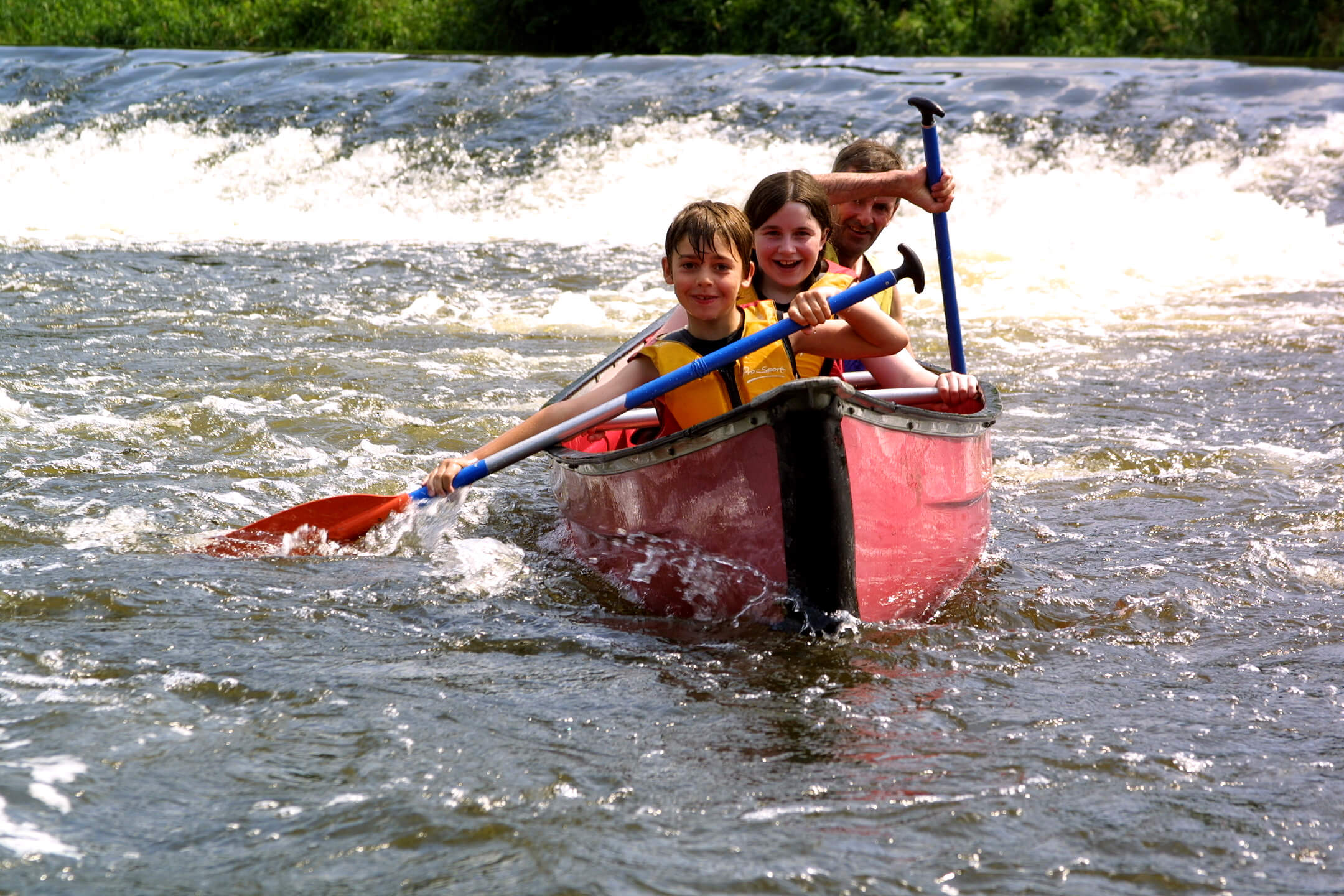 The delivery of this Intervention will require a collaborative approach by both public and private parties as it addresses a number of individual projects. While this Intervention demonstrates how a blue link along the Burren River would connect existing amenity spaces as part of an ecological corridor, the delivery of the Cash & Carry site and the area adjacent to Carlow Castle is open to interpretation as detailed design is progressed by the Local Authority or through consultation and partnership with the Local Authority.

The key project within this Intervention is the Burrin River walkway, which will deliver a new pedestrian route and faciliate an ecological corridor through the Town Centre.

A similar project, the River Triogue Blueway, was proposed as part of the Strategy 2040: A Vision for Portlaoise, which sought to open up the Triogue as a linear park through the Town. The linear park would provide a host of practical benefits to the people of the Town delivering a useful pedestrian and cyclist corridor and connecting the southern and northern areas in a very direct manner. Similar to the River Burren walkway the Triogue Blueway will also act as a new amenity spaces that will enhance the quality of life in the Town, making it more liveable and visually attractive.

As with the River Burrin walkway, the entire length of the public realm improvements as part of the River Triogue Blueway are unlikely to be delivered in one project and will be phased due to the mixture of public and private land covered. To date €100,000 has been secured for a new pedestrian path and cycleway along the Triogue River. These upgrades were identified as key components of the Strategy. 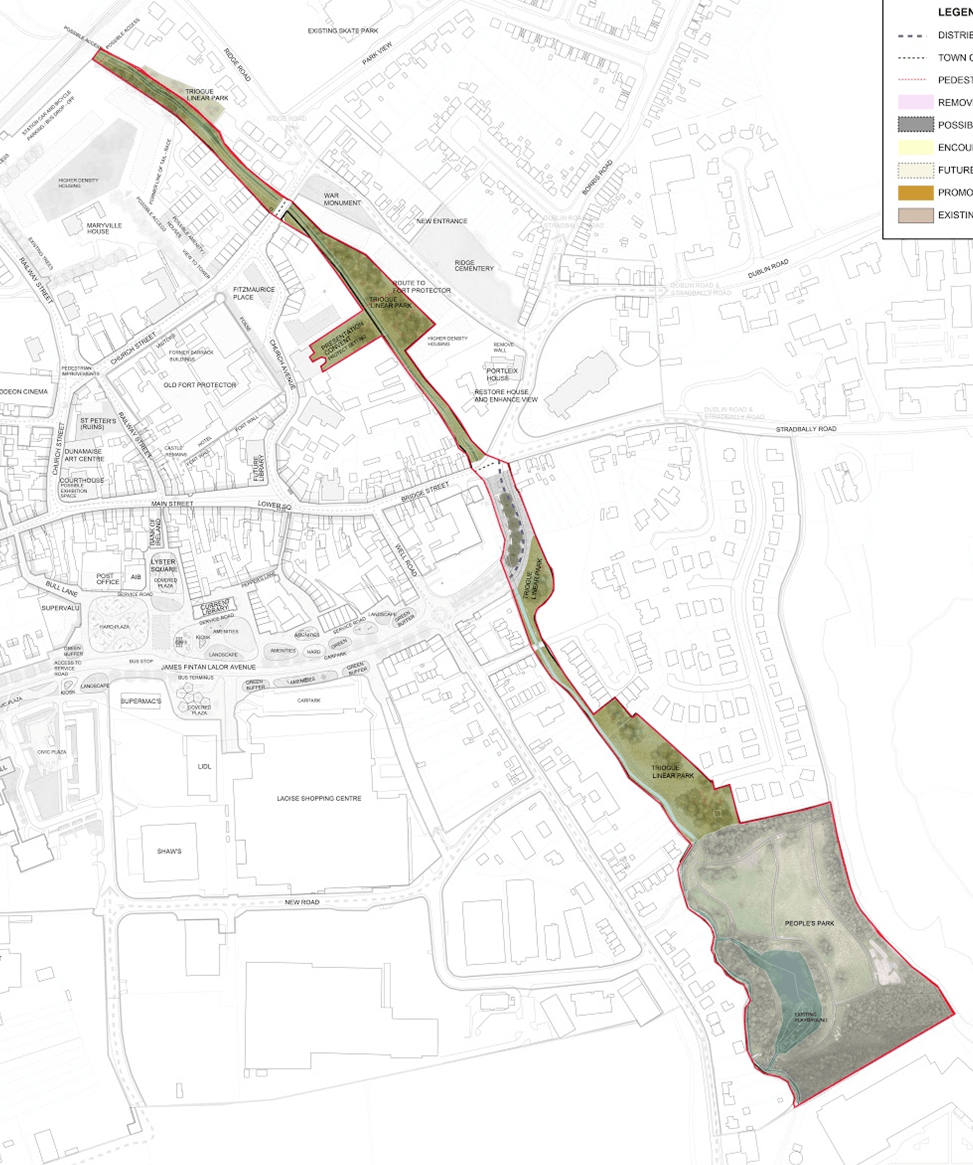