The Cultural Quarter consists of the Carlow College campus, Visual, and the Carlow Courthouse. Ideally located within the Town Centre, Carlow College is situated within an expansive eighteenth-century campus positioned behind the main shopping district. The original campus entrance on College Street is located approx. 100m from Tullow Street and is the main pedestrian entrance for students in the College. The campus is also located a short distance from the Railway Station on St. Joseph’s Road, however, there is no direct access between the two.

Carlow College is an important asset in the Town and is a key employer and education provider serving the Town and wider area. The College occupies a major landholding and contributes to civic, cultural, religious, educational and recreational amenities for Carlow Town. The Vision for this Intervention Area is to provide additional connectivity through the Town Centre, from east to west and from north to south. The Barrow Track lies to the west of the site and the Railway Station to the northeast. Permeability through Carlow College as a public space is a key component of this Strategy and is promoted through the design features of this Intervention.

This Intervention will improve the connections between key retail, recreational, educational and civic spaces in Carlow Town as well as to public transport, and will entice people to spend more time in a vibrant and modern Town Centre. It will further act to support and enhance the strategic partnership between Carlow College and IT Carlow. Through enhanced connections with public transport, improvements in the public realm and general enhancements to the attractiveness of the Town Centre, this Intervention will support Carlow in becoming a first class destination for higher education. 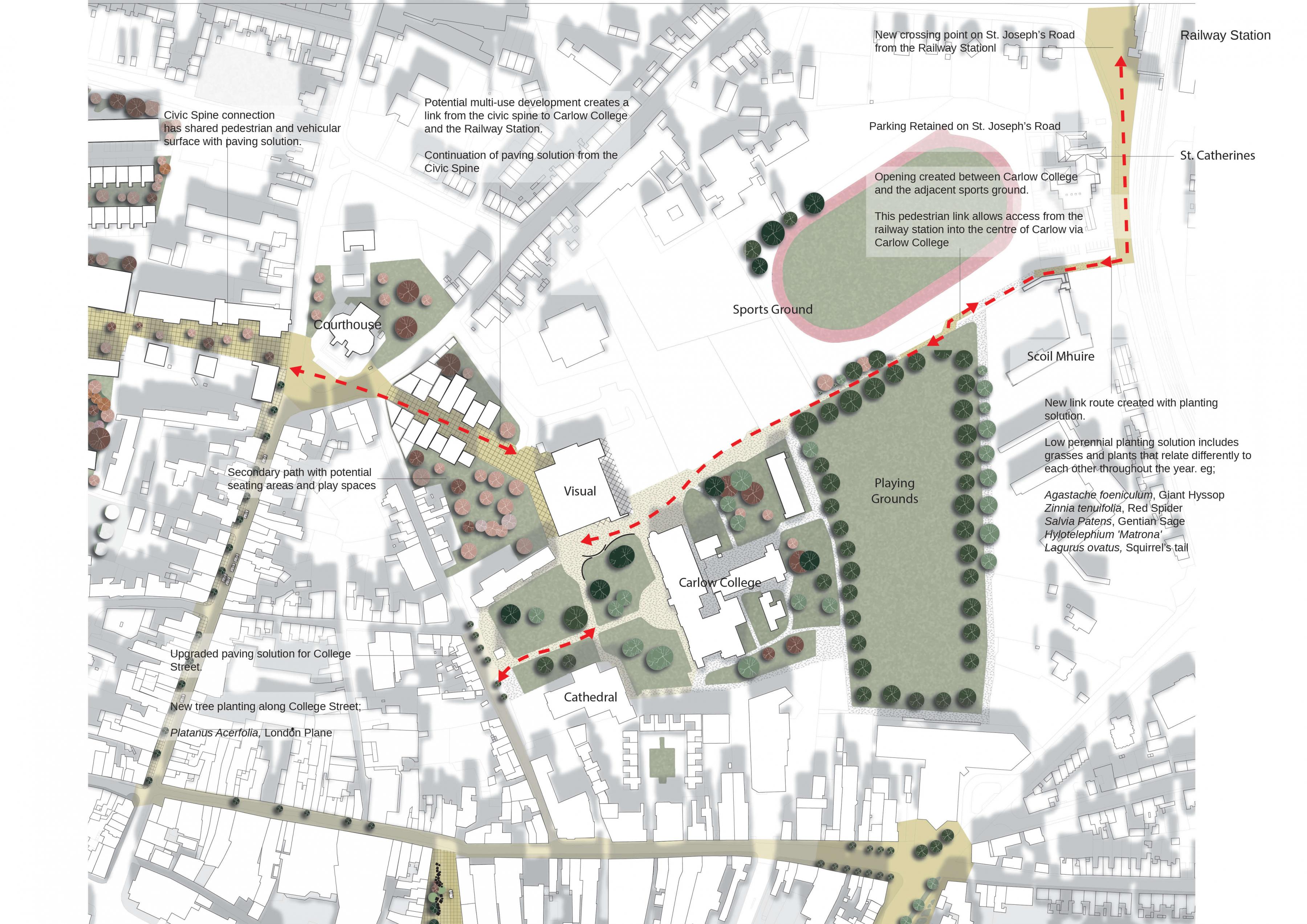 The area around the railway station and down through Carlow College will undergo a significant visual transformation. Transport is fundamental to connecting people, businesses and services and improving the integration of the public transport network with Carlow will result in significant benefits for the Town. Carlow College has a number of locational advantages in terms of recreational, cultural and civic amenities such as VISUAL, the Courthouse, Carlow Cathedral and sports grounds within its campus. The use of the grounds at Carlow College as a connection point will allow the area to be embraced as a cultural quarter of the Town.

This Intervention ensures the optimum use of underutilised spaces and connections while integrating the existing social, educational, cultural and historic assets of the Town. The greater exposure of these assets will build civic pride and promote local appreciation for the betterment of all. The opportunity exists to utilise publicly owned buildings, such as the library, for potential reuse as a cultural hub and act as a connection point between the Town Centre and the College campus.

Furthermore, the natural environment is a key asset in any urban area and the location of Carlow College in the Town offers a unique asset which can be optimised through well-designed upgrades to play a role in an expanded open space network. Its sylvan qualities and linkage capability provides a special opportunity to link the Train Station to the Town Centre in a direct manner along a route of interest and beauty, supporting the greening of Carlow and its aim to become more sustainable. The connection to the Civic Spine in relation to the Barrow Track is an important opportunity which can be explored in conjunction with the College and allow for a major east-west connection across the Town and would provide greater accessibility to the River Barrow.

Public transport is hugely important for connecting people to opportunities, getting residents to work, education and training, connecting businesses with suppliers and customers, as well as providing easy access for tourists and visitors to get to events, leisure activities and shopping. Therefore, the focus on integrating the rail station with the Town Centre will provide huge economic benefits to the Town with a well-connected, integrated and attractive transportation system, where people will choose Carlow as a place to live, study in, invest in, and set up a business or visit.

The projects within this Intervention will not only be of interest to visitors but will engage the Town’s residents and bring greater utilisation of the area as part of the wider network of activity routes proposed around the Town Centre. By delivering this Intervention, the amenity for everyone will be greatly improved. It has the potential to be recognised as an exemplar for connectivity between a Town’s public transport node, an educational campus and a revamped urban centre. The opportunity to link these key urban components will have cumulative benefits to not only the Town but Carlow College and the train station in terms of attractiveness, convenience and accessibility.

Carlow College is at the centrepiece of the overall strategy of regeneration in Carlow Town and promotes healthy, innovative, culturally rich and socially connected community activity. The main design feature of this Intervention, the connection between the campus and St. Joseph’s Road, will require collaboration with St. Catherine’s Community Services Centre and St. Leo’s College.

Carlow County Council are exploring the potential of regenerating Carlow Library and the Presentation Buildings along Tullow Street. Incorporating the Public Library, County Archive, Geneaology Centre, County Museum, Tourist Information Centre and Civic & Learning Space, the Presentation Buildings are a key community asset where residents and tourists frequent and spend time. The regeneration of these buildings into a modern cultural destination will support a reimagined Town Centre, facilitate improved social infrastructure and act to attract footfall. This regeneration project will also act to support the Cultural Quarter Intervention as it links the Town Centre with Carlow College, the Cathedral and Visual, creating a synergy between the two Character Areas and reinforcing the concept of the ‘Heart of the Town’ back into Carlow. 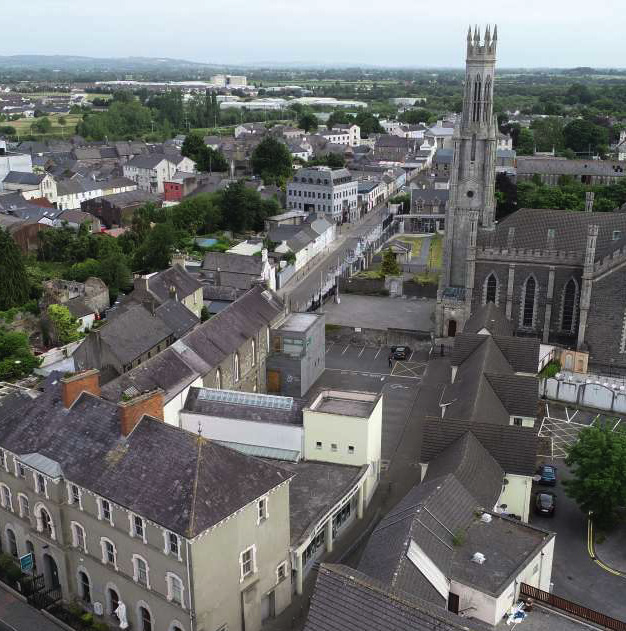 Visual is one of Ireland’s leading contemporary art spaces situated in the heart of Carlow Town and opened in 2009. It houses a 335-seat theatre and the largest whitecube gallery space in the Country where it produces a programme of both commissioned and existing high-quality national and international contemporary art, plus a host of performances and events in multiple disciplines, including theatre, dance, film, comedy, literature and music.

This €18 million development was a joint project funded by the Local Authority with a grant of €3.17 million from the Department of Arts, Sport & Tourism under the ACCESS Programme.The site was generously donated by Carlow College and an international architectural competition was held by the RIAI, with the final award of contract to Terry Pawson, a British architect with vast experience in designing buildings for the arts and cultural sectors.

This facility is not only an important hub of activity in its own right but it will also act as a gateway or nodal point t for those moving between the Railway Station, the Courthouse and the Town Centre. The integration and linkage of town functions such as culture, transport, civic and educational highlights the importance of the investment sought which seeks to connect key areas of the Town whose adjacencies have not been fully exploited to date.

The projects listed in this Intervention can be brought about and developed either on their own or as part of a wider development process, e.g. funding applications, public and private ventures. It is important that the major design features outlined in this Strategy are developed in line with the relevant health and wellbeing principles as well as other potential environmental benefits that could be delivered as part of the process.

One of the key issues affecting population growth in Carlow is the Town’s capacity to retain its younger population. Approximately 61% of people in third level education from the South East Region study outside the region and between 2011 and 2016 there was a decrease in the population of Carlow Town in the 20-34 age group of nearly 900 people. Going forward, it will be critical for Carlow to retain a greater proportion of people in this age group. An expanded third level offer, combined with improved career prospects and improved opportunities for living in Carlow Town will help Carlow to compete with other locations. 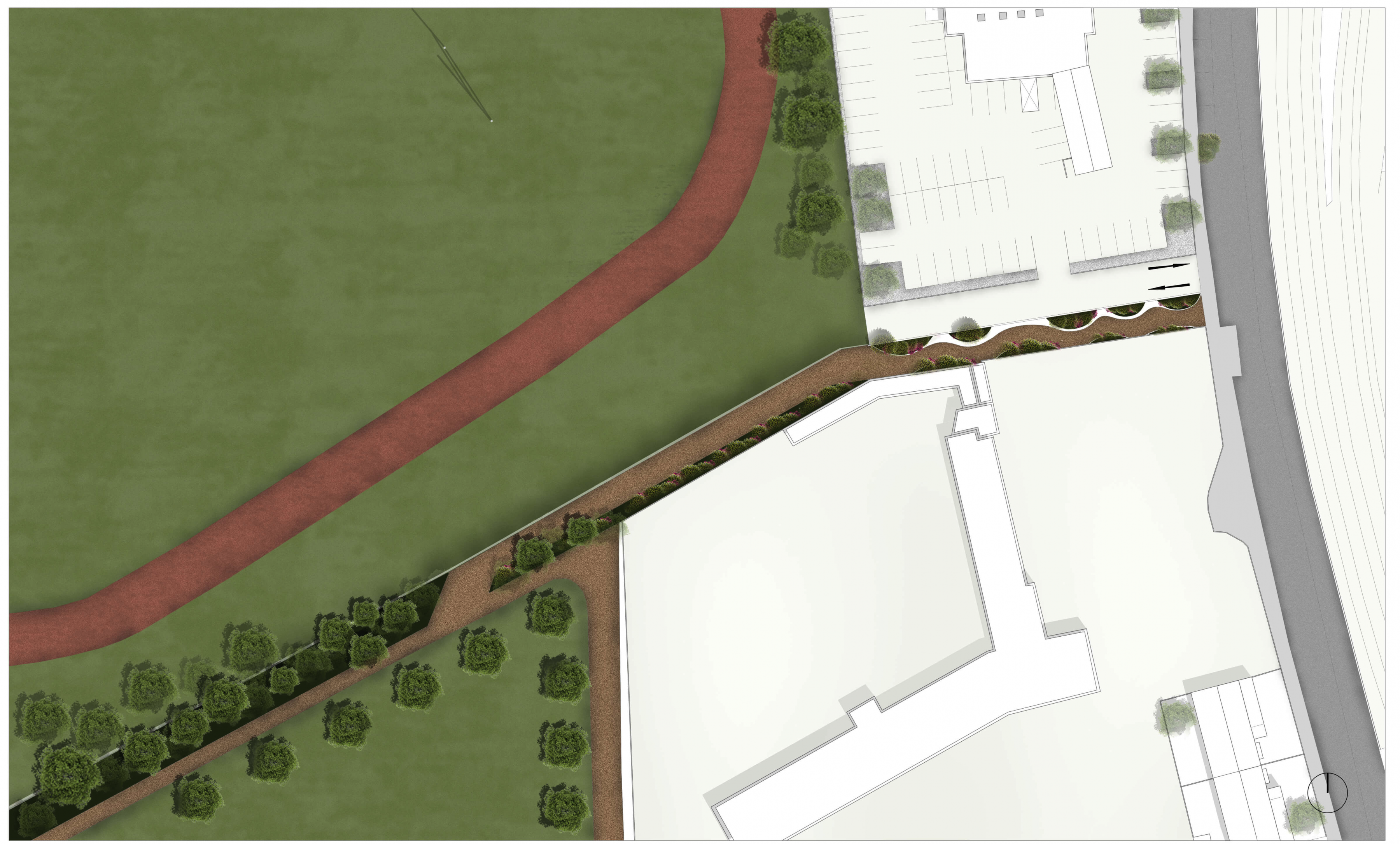 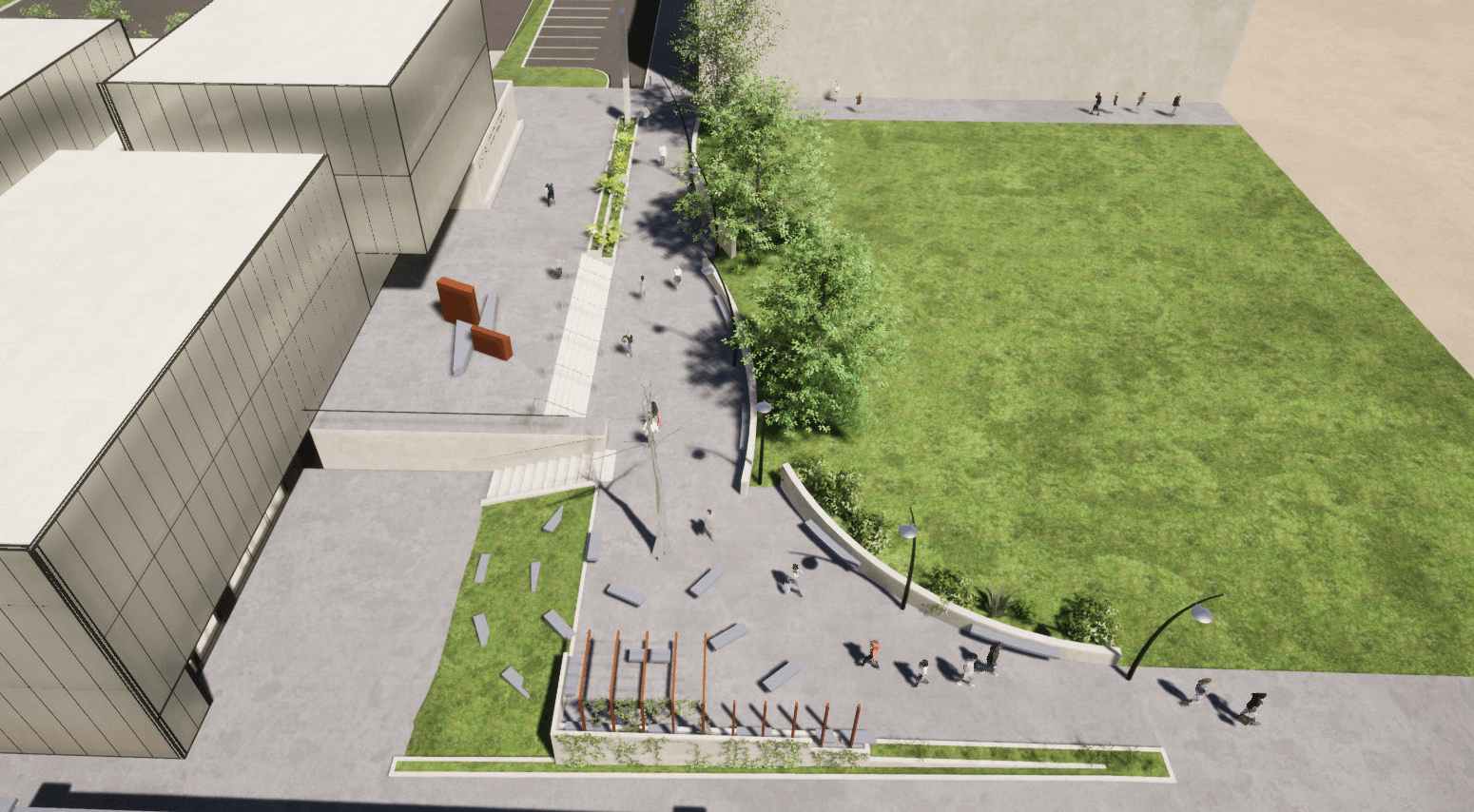 The key feature of this Intervention is the Railway Link through Carlow College. The site topography and characteristics as well as the fact that the proposal relates to the provision of new links though an existing campus setting make the identification of an exemplar for comparable costs difficult.

Carlow College in terms of position can be compared to Trinity College, as a historical third level institute that forms an integral part of the built fabric of an urban area. In this regard Trinity College has also faced issues with the enclosed nature of its campus, specifically the lack of integration with Pearse Street. This issue is being addressed through the new €80 million Trinity Business School onto Pearse Street that delivers a pedestrian entrance and the €62 million Printing House Square development, which provides student accommodation and a new public gateway into a new “public city square”.

While this exemplar does not provide costings that can be directly applied to the Railway Link through Carlow College it does demonstrate how another historic third level institute in a similar position is addressing the issue of a segregated campus. With regard to funding, of note is the fact that most of the new construction activity at Trinity College is funded exclusively from borrowing, philanthropy and private income generated by international students and other sources.

Trinity is making these investments in its campus based on demographic trends that indicate that numbers in higher education will increase by around 20 per cent over the coming decade. Improved facilities will not only be required to accommodate this growth but to attract students to the University in a sector where choice and competition are ever increasing. If Carlow College is to expand as part of the Technological University for the South-East, grow its student population and become a leader in new fields such as construction innovation then it too needs to consider both the improvement of existing facilities and the delivery of new ones. Such development would facilitate improved connectivity between the campus and the surrounding area, specifically the Railway Link through the College.